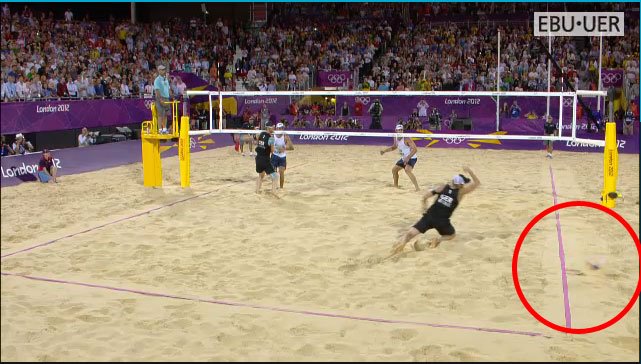 I have just returned from the Gstaad Grand Slam in Switzerland. Apart from seeing some pretty amazing Beach Volleyball, particularly from the Dutch guys, Brouwer-Meeuwsen, my strongest memory of the event was the number of really bad refereeing decisions that I saw.

Don’t get me wrong. I am not a guy who goes around sledging ref’s for no reason. I actually have a lot of respect for referees. I had a chat to a few of them last week at the tournament in Poland, and discovered that they are often doing 5 or 6 matches in a day, which is a long time to maintain full concentration, standing in the sun on top of a referees stand.

And I guess it is with this thought in mind that it blows my mind the number of balls that hit lines, get called wrong, and the ref refuses to look at the mark. We all know that refs are human, and make mistakes, but why do we need to live with mistakes when there is a mark in the sand to give us the correct decision?

The most dramatic example was in our game, Huber/Seidl Vs the Swiss guys, Gabathula/Weingart on centre court in front of their home crowd. In the first set, they made a dig on set point 20 – 19, and Weingart hit a line shot. One of our guys pointed to the sand, clearly calling the ball in. The ref called it out. The mark was there for everyone to see, and it clearly touched the line. Our guys just looked embarassed and apologised to the Swiss guys… it was all a bit awkward. We were awarded the point and went on to turn the game and win 2 – 0.

Same situation later on in the first elimination round between Nummerdor-Schuil and Dalhausser-Rosenthal. Nummerdor hit a ball deep, and it was called out. That point was a change of ends, so he had a chance to check the mark. It was in. He asked for the ref to check, and the ref refused…

In clay court tennis, the referee (umpire) will check several marks throughout the course of a match at the request of players. It’s just part of the game. It ensures that everyone is comfortable that the correct call has been made. But in beach volleyball, our referees simply make their call and stubbornly stick to it no matter what. I would have thought that things might have changed after the Olympic final was decided on a ball that should have been checked. (Not saying the call was wrong, just that it should have been checked.)

Am I being unreasonable here? Is there a huge difference between tennis balls bouncing on clay and volleyballs bouncing on sand that I am failing to understand? Or would you agree that there should be a little more give and take in the referee/player relationship?