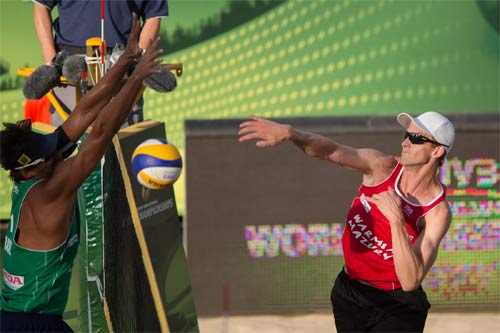 The World Tour is full of surprises this season, with a lot of teams winning medals for the first time, probably most notably the Dutch guys winning the World Champs from a previous best result in a Grand Slam of 9th.

Right now, every tournament is up for grabs. There are a lot of good teams, and there is a lack of great teams. In fact I think it’s safe to say that we don’t have any great teams on the tour at the moment.

In my opinion, a great team displays three qualities.

1. They have a game that clearly distinguishes them as a top tier team. What I mean by that is that they are untouchable in the first half of the tournament and only get tested when they face the other higher seeds.

2. No one beats them easily. When they go down, it’s because the other team played great volleyball, not because they had a bad day.

3. They bring their best game to the big tournaments.

So who is getting close to wearing the “Great team” badge?

There are a few teams that clearly have the potential to step away from the pack. Dalhausser/Rosenthal are an obvious choice. I don’t need to tell you about their record, they are both awesome players. Dalhausser was definitely part of one of the more recent “Great teams”, Rogers/Dalhausser, but this season, while winning two events, they have also finished 9th twice and 17th once. One of the 9th was at the World Champs where they just didn’t quite play the way everyone expected them to. (I personally had them picked to win it).

The next team getting close are Pedro/Bruno. These guys have a much more consistent look about them, finishing no lower than 5th this year, and playing in two finals. The problem here is that one of their two 5th was at the World Champs, where they lost two pool matches and only just scraped through to the next round. They are strong, but every other team in the top 10 believes that they can beat them and that is making things tough for them.

Ricardo-Álvaro Filho is the next team worth a mention. Ricardo has definitely been there before with Emanuel, and this season seems to have improved each tournament with his new partner Álvaro Filho. Their last 4 tournaments have been 9th, 5th, 2nd (WCH) and 1st in Gstaad, so they are moving in the right direction. It will be interesting to see how they go this week at Long Beach.

And the last team on my list, is the one team that ticks all the boxes for me in terms of potentially meeting the three requirements above. Brouwer-Meeuwsen from the Netherlands. They have shown themselves to have the ability to demolish just about anyone. After watching Meeuwsen get himself out of trouble after a bad pass by hitting back to the line, OVER Phil Dalhausser in Gstaad on their way to a very convincing 2-0 (21-17, 21-15) win puts a big tick in box number one. Winning the world champs shows that they clearly know how to play the big tournaments. The only question (and it’s a big one) is whether or not they can make their A game the norm, instead of only playing it once or twice a tournament as they have been doing. (World Champs excluded ;-).

So they are my tips for the next team to dominate the Beach Volleyball World Tour. What do you think?