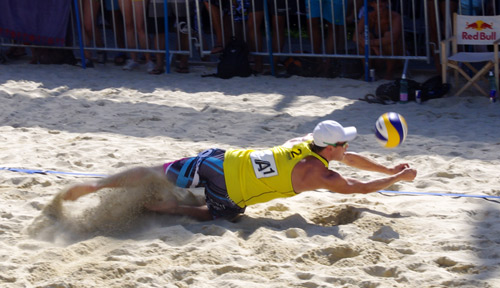 I am coaching a squad of players in Austria at the moment. We only had three guys at training today, so I played as the fourth, and in one of the drill, I found myself getting worked over.

I was siding out against a back court player who’s name is Robert Kufa. He’s a great player, watch out for him this summer.

The first ball, I got a great set, had a good look at the defense as I jumped, he was sitting on my hard angle, as I looked up at the ball I didn’t see him move, so I rolled a line shot over the block, right to the corner, … but he dug it. He must have moved late to the line.

He had stepped to the angle, dug my cut shot, and scored another point…

I am pretty sure that he made a good guess on the first one, then made three educated guesses for the next three. Especially on the last cut shot.

He probably guessed what I was thinking.

We usually play it before a match instead of tossing a coin. At home there is usually almost as much trash talk during the paper, scissor, rock game as there is during the match. It’s an important game, for more than just bragging rights…

Paper scissors rock is a psychological battle, very similar to the battle between a defending team and a side out team.

A couple of years ago I started to play paper, scissors, rock with my kids (3 and 5 years old). At first, they just always went rock, because it was easiest. That was easy, I just went paper, and won every time.

Next they got the hang of all three different hand shapes, and started choosing randomly. This made the game pretty much 50/50. I could not beat them because they weren’t thinking.

How does this relate to beach volleyball?!?!

Well here we come to our first important beach volleyball / paper, scissors, rock comparison. You can’t out think a player that is not thinking.

Often when you play against a player that likes to shoot line, or cut angle, a great tactic is to fake a move towards the line shot, and then just before the attacker hits, run back to the cut shot, or vice versa. When you are playing a against a player who is not looking at you… don’t bother. It’s a waste of energy.

Back to the game with my kids…

Next, my daughter realised that I was always going “paper”, so she started going “scissors”… Suddenly it was game on! Luckily for me, her tactics were very simple. She started playing to beat my last play. I went “rock” to beat her “scissors”. The next play, I went “scissors” because I knew she would go “paper” to beat the rock that I showed her in my last turn.

Back to the court.

So let’s assume that you are playing against an attacker with good court vision, and an intelligent game plan.

Third play: This is where you block line and your backcourt player shuffles to the cut shot as the attacker approaches, then runs to the line, just a split second before the attacker contacts the ball. Hopefully the attacker saw that you were moving to the angle, and plays a line shot, and there you have a chance to make a dig. That’s a standard fake play, but the likelyhood of success is much higher if you set it up with the first two plays. (It’s a bit like training a dog

Back to the game with my kids…

The next thing that happened was a disaster. We played a game for TV time, or something pretty important, and my daughter got smart. She jumped ahead of me and started playing to beat the play that I was going to make to beat her, based on my last assumption, which was that she was playing to beat my last play. (Read it a few times slowly… I am having trouble following it myself

So I play “rock” and win.
Next round, I play “scissors” because I knew that she would play “paper” to beat my last “rock”….
But!…. she played “rock” instead, because she worked out what I was doing… and she beat me and got to watch TV.

Back to the court.

So your blocker blocks line, and you shuffle to the angle shot, then run to the line at the last minute… and watch a very poorly hit cut shot hit the sand behind you, right where you were standing… Oh, oh… he’s on to you. Now you have a battle of whits that will probably decide the outcome of the match.

Next play, you shuffle to the angle, then take a big step to the line at the last minute… but stop, and return to the angle. Will your opponent hit to the open line, or will he drop the cut shot right on top of you, because he thinks you are faking again?

So here begins a game of fakes, bluffs and double bluffs that is part of what makes beach volleyball such a great sport.