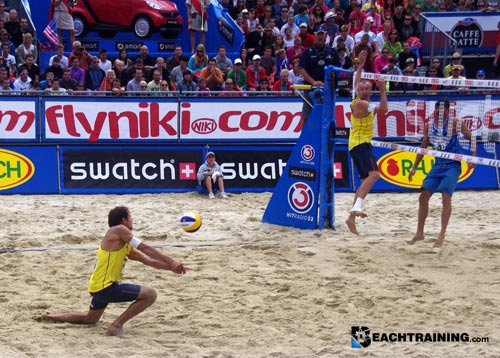 Pedro/Marcio have been denied once again in their third Grand Slam final this year by steady performance from Nummerdor/Schuil in a close three set final 2-1 (14-21, 21-12, 15-13). The timing is perfect for the Dutchmen as they prepare to fly to London to compete in their second Olympic games together. (They posted a 5th in Beijing in 2008).

Their performance was not completely convincing, dropping their first set in the final 14-21, and at times struggling with their side out, but they more than made up for it with some wonderful defensive plays, and extraordinary transition setting to make the most of their point scoring opportunities.

The Dutchmen have certainly proven that they have what it takes to medal in London, they know how to win the big matches and their unusual style of play clearly unsettles a lot of their opponents. It will be interesting to see if they can improve on their last Olympic result of 5th.

The third fourth playoff was a forfeit from Rogers/Dalhausser withrawing due to injury.