We are lucky enough to be in Klagenfurt for the World Tour grand slam this year. It’s a perfect venue. Because the Olympics are so close, a few of the higher ranked teams have elected not to play, which has left some gaps where some of our lower ranked mates have slipped straight into the main draw.

So first game we saw was on Court 2, just outside the centre court stadium. Williams-Metzger Vs Soderberg-Hoyer DEN. I wish I had had my camera ready for the first point, because Bo fired up with the ref straight away over a line call, in classic Bo fashion. Some things never change. 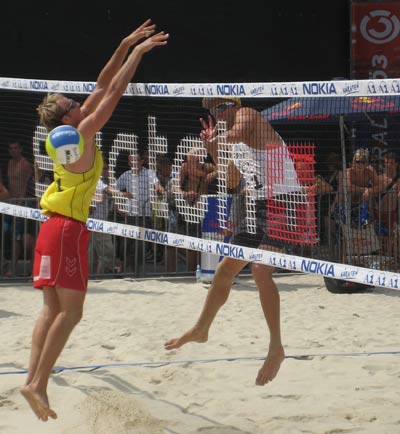 Willie puts the ball past Anders

The game was pretty straight forward, but the Danes were a little out classed. For me the contest was summed up in one point, where Willie rolled a line shot, Bo made a really great diving dig, the ball was perfect for Anders to set, Bo gets a great set, and gets absolutely stuffed straight down by Willie on the net.

First time I had seen Willie and Stein play together. They are a class act.

Next game was Lochhead-Pitman NZL Vs Schacht-Slack. This was a fairly one sided affair. I think it is fair to say that at the moment Josh and Schachty have Jase and Kirk’s number. Not an inspiring game, but impressive play from Josh and Schachty. They are playing great volleyball.

So after the first day, Josh and Schachty had two wins, Kirk and Jason had two losses and, and it was a similar situation for Pool P. Willie and Stein with two wins, and Bo and Anders with two losses.