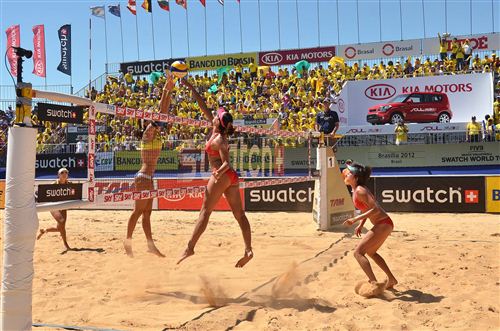 Todd Rogers and Phil Dalhausser have started the season as they finished the last one, winning the Brasilia Swatch World Tour 2012 FIVB event, but they did it the hard way after losing in the second round to Santos-Vitor Felipe.

The big surprise was the second placed Fuerbringer and Lucena, who also battled through the losers bracket, losing in round three to Herrera-Gavira ESP but then repaying the favour to beat the Spaniards in the semi final. Also worth noting was the victory in the game for 9th where they eliminated Olympic qualification rivals and fellow Americans Gibb-Rosenthal.

Ricardo also made sure his presence was also felt, taking the third place on the podium with team mate Pedro Henrique Cunha.

Injury Alison-Emanuel BRA: Alison-Emanuel were forced to withdraw from there 7th place match against Roger-Dalhousser when Alison injured himself chasing a ball over the barriers. It is reported that he has received nine stitches.

In the Brasilia Swatch World Tour 2012 women’s tournament China has started the season with a win, Xue-Zhang Xi beating Brasilians Talita-Antonelli convincingly in the final. There was not a lot to separate the last 6 teams in the women’s event, with five out of six of the final games decided in the third set, and four of those by only two points.